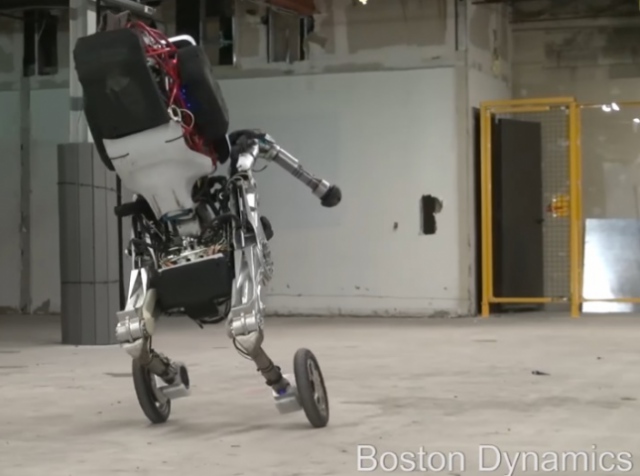 The first video starring an odd robot ‘got leaked’ into the network in early February and attracted wide attention of users. This is not surprising as the video demonstrated a strange device resembling a chair with half-bent arms and legs. But, at the same time it does clever tricks, jumps backwards and avoids all obstacles keeping balance at that.

A few days ago, Boston Dynamics officially presented its development on YouTube. The Handle robot is designed for goods transporting. The machine is able to move objects up to 45 kg at a speed of 14.5 km/h. The device operates autonomously using two legs supported by wheels to move. Thanks to such design, the robot can perform complex dynamic movements.

As mentioned above, Handle can jump (1.2 meters high with its own height of 2 meters). Also, it is able to move down the stairs deftly, move on slippery surfaces and rotate around its axis without losing balance. To do so, Handle actively uses weight of its own body to keep balance during rotation, leaning forward when turning and crouching before jumping. All this you can see in the official Boston Dynamics video.