What can Russian humanoid robot FEDOR do? 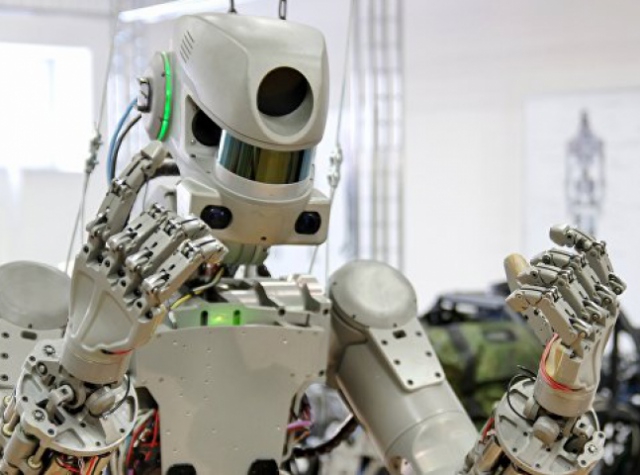 FEDOR (Final Experimental Demonstration Object Research), developed as a part of the Foundation for Advanced Studies project, is needed for rescue operations. However, before going on the first mission, it will have to master a number of skills that developers consider necessary for responsible work.

1) Repeat movements after the operator

The robot is built on the combined remote control system basis. Besides the fact that it moves independently, FEDOR is coordinated with the human body. He repeats a person’s movements, despite the fact that the numbers of muscles and joints do not match. Distance piloting is done with a special control suit with sensors.

2) Transfer data back to the control suit

The virtual reality headset immerses you in the environment in which the robot is located. Thus, sensors work not only to directly control the android, but also in the opposite direction to get information about the environment to the operator. The costume lets you know how big the physical load is, as it interacts with the person‘s muscles.

3) Do the splits, move the head up and down

FEDOR is the only automatic device in the world that can do side and middle splits. This skill will help in overcoming obstacles during rescue operations. The mechanism is as mobile as possible and can look vertically up and down. Even while moving when lying down Fedor looks in front of itself and not at the floor.

Robot’s video channels can work simultaneously and separately. Therefore, when it manipulates instruments in two hands, the image is divided into the left and right eyes. The information analysis is done from all visible objects.

FEDOR can drive a car with manual transmission and even turn the steering wheel with changing its hands. These actions can be performed without any operator interference, system works independently. The first prototype is acquiring knowledge by watching a person drive.