DHL implements an autonomous system of parcel delivery by drones 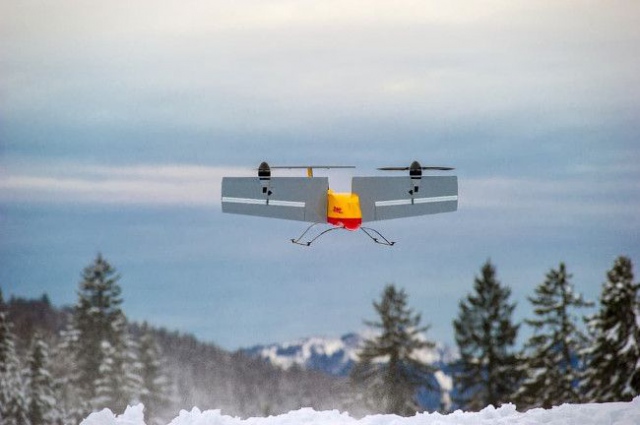 German company DHL has completed testing the system of parcel delivery by UAV, which works without human interference.

The new Parcelcopter is a third-generation drone. Previously DHL company was developing drones for delivery of blood samples and medications. The new drone can fly at a speed of up to 70 km/h (the maximum speed of the preceding model was 43 km/h) and carry parcels weighing up to 2.2 kg. Testing was carried out from January to March in Bavarian Alps: drone delivered parcels from Alpine German community Reit imWinkl to a mountainous plateau. It took it only 8 minutes to complete the journey, while it would take half an hour for a car.

How does new generation delivery function? People bring their letters and parcels to automated station DHL Parcelcopter SkyPort. It is equipped with a small helicopter pad on the top of it – the place for drone landing. Once the drone lands, a parcel is automatically placed into the inward compartment of the drone. Then the roof of SkyPort opens and the drone flies away to destination point. Addressee has to enter a unique code of the parcel, and afterwards he can take it from the station.

Parcelcopter was developed especially for Alpine lands, where weather conditions change very quickly. During the testing period 130 parcels were delivered. DHL is intended to continue spreading autonomous stations. They can be used not only in remote settlements, but in large cities as well.