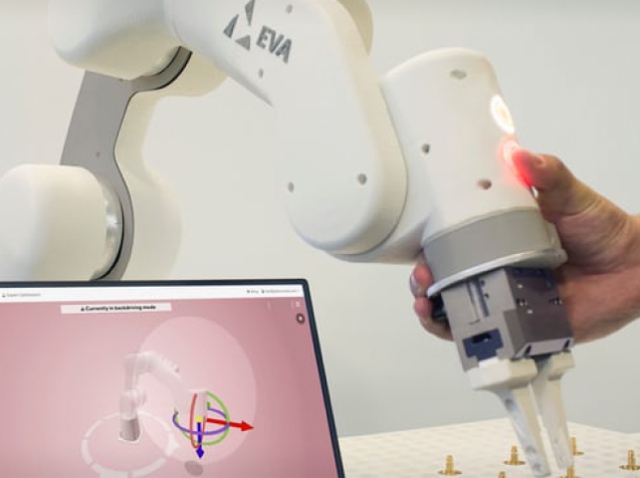 London startup Automata Technologies plans to make robotics affordable for manufacturing automation. Developers of the Eva manipulator assure that it will not replace employees.

Is there really nothing to worry about?

Suryansh Chandra and his partner Mostafa El Sayeddo not yet have a great experience in robot creation to show. According to The Guardian, they work in the London architecture studio Zaha Hadid. The original idea was not to earn a fortune on robotics. Developing a desktop robotic arm was a necessity. When constructing a steel mushroom from 500 plates at an exhibition, they thought that a manipulator could perform routine operations instead of them. So began the work on the robotic arm - Eva.

The Automata Technologies team planned to release its robot in December 2015, but it faced a number of problems, for example a high retail price for components. So it took them a while to make quality parts that could withstand the work load. After the team develops a robot with a lifetime of 2 years capable of working 8 hours a day, they can move on to other tasks. They are also going to integrate an artificial intelligence into the robot to increase learning capabilities.

The release date of Eva device is yet unknown, but the creators hope that the invention will make automation process in factories and plants more accessible. It should not replace workers in production, but only relieve them from performing simple repetitive tasks.