Hoverbike - a revolution in aviation 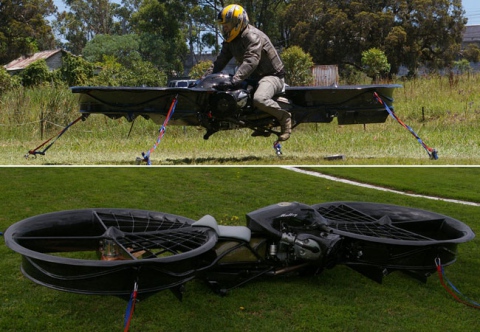 Chris Malloy wants to change the way we view personal transportation. Malloy and his team are running a Kickstarter campaign to raise £30,000 to help create a long term income stream. The income will be used to manufacture and sell 1/3 scale Hoverbike drones, and develop prototypes for the full sized Hoverbike.

The Hoverbike hopes to combine the simplicity of a helicopter with the freedom of a motorcycle. These are great goals that will result in a highly demanded product, but Malloy tells us in the video that development is expensive and challenging.

Hoverbike drones will be mass produced using the new design. The quad aerodynamic concept has a pair of blades in the front and another in the back. Blades are offset from each other to provide additional thrust. This second generation design looks more like a quadcopter but still flies like a hovercraft.

The drone features guard to keep the blades from doing damage and a large area to hold a payload. One of the great features about the drone is its ability to fold up on itself and then fit into a carrying bag. Cyborg Buster is the drone pilot shown in the Kickstarter video, and he can be printed on a 3d printer and then outfitted with a Go-Pro camera.

A MAcro Micro board acts as the controller on the Hoverbike drone and is Arduino compatible. The board was designed to drive the LEDs on the Hoverbike and also to allow operators to control levers, release pins or add additional functionality.

Malloy and his team are building an incredible product. Most likely there are decades between this project and the time that we will be able to drive street legal hoverbikes down the road but this is a great step toward the end goal. Current estimates say that Hoverbike drones will ship in December 2014.