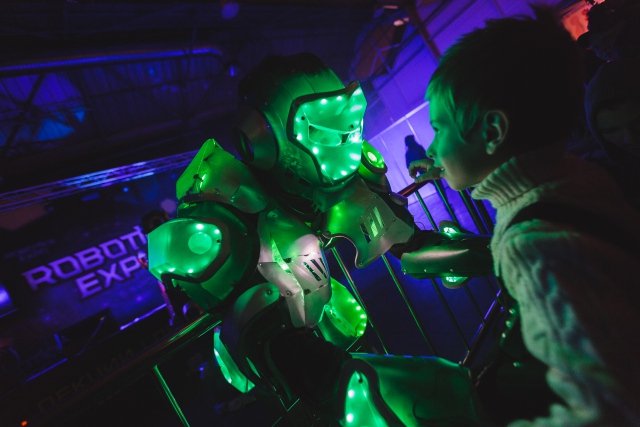 According to registration committee, more than 10 000 people attended Robotics Expo 2014, including 1,000 guests of the first B2B-day and about 300 media representatives.

Over 50 companies took part in the exhibition to demonstrate their innovative products and services.

Robotics Expo 2014 combined exhibition, conference, Speed Dealing platform for startups and investors, public lectures, copterы competition - Hot Copter Challenge, workshops for children. In the evening for two days (28-29 November) there was a Robotics Show on the main stage was held,  robots-dancers and actors taking part. The headliners of the show program were robot RoyMegan and STREKOZA project. 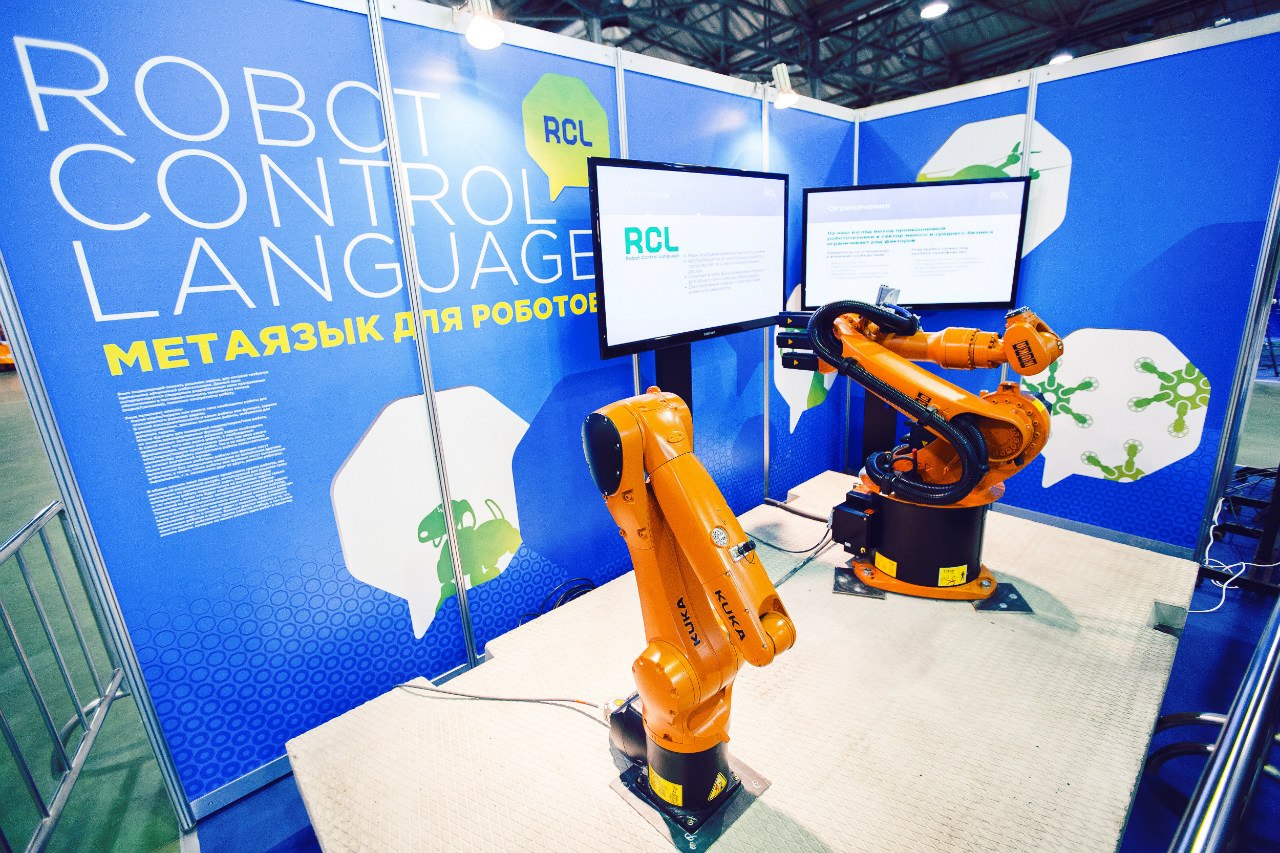 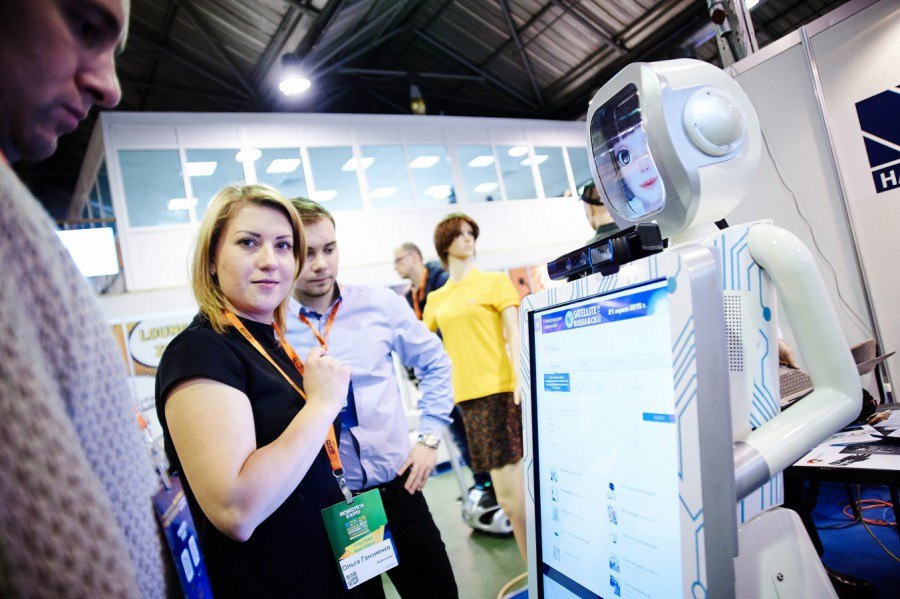 Everybody was impressed by robots-mannequins from Kb3Robotics, telepresence robots from R.BOT, Fibrum virtual reality helmet, NAO robot from "Teledroid", robotic snow remover from Promobot which can be particularly useful in coming wintertime, robotic toilet for cats from CAT Genie, and also 3D printed InMoov robot.

II International Conference on robotics - Robotics Conference that was held in the first two days of the exhibition (on 27 and 28 November 2014), consisted of 24 exclusive reports and 2 round tables. Andrey Novikov was moderator of the conference.

Roundtable of the second day "Are entrepreneurs dreaming about robots-androids?", jointly organized with Skolkovo Robotics Center, brought together representatives of venture capital funds, researchers, entrepreneurs and teachers to discuss pressing issues of the industry. 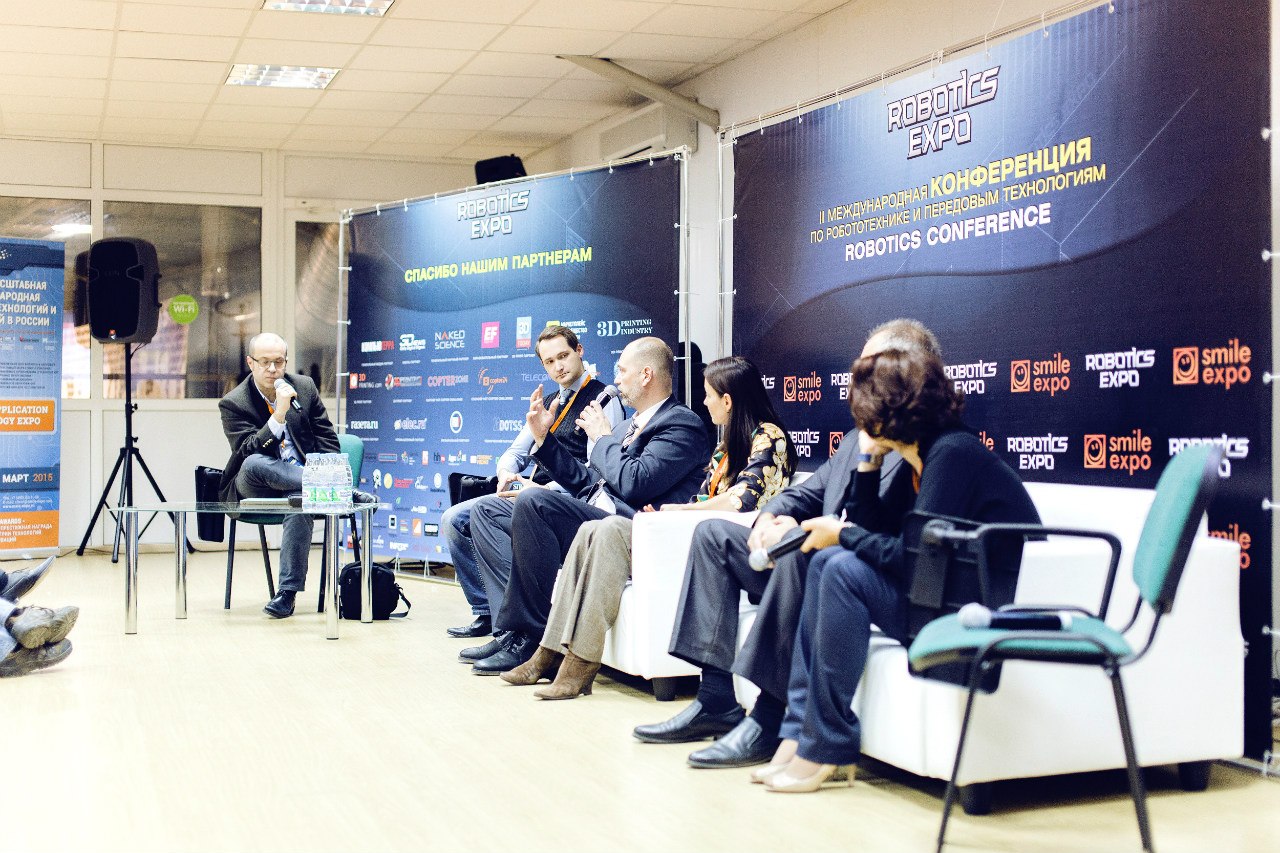 "The discussion that came around is very important. There we managed to understand whether entrepreneurs need robots-androids. I believe that development of robotic industry is a key task of our country. At this point, this discussion brought together the most important people in the field of robotics in Russia to discuss the state of industry and its prospects in the country. And I think this discussion panel justly became the best in the history of events in robotics field", Albert Efimov, roundtable moderator, said.

Speed Dealing section, held on November 27, brought together robots developers and investors for business meetings. During the entire day startups and developers of robotics had an opportunity to present their projects and communicate with investors tete-a-tete in the format of "fast dates". 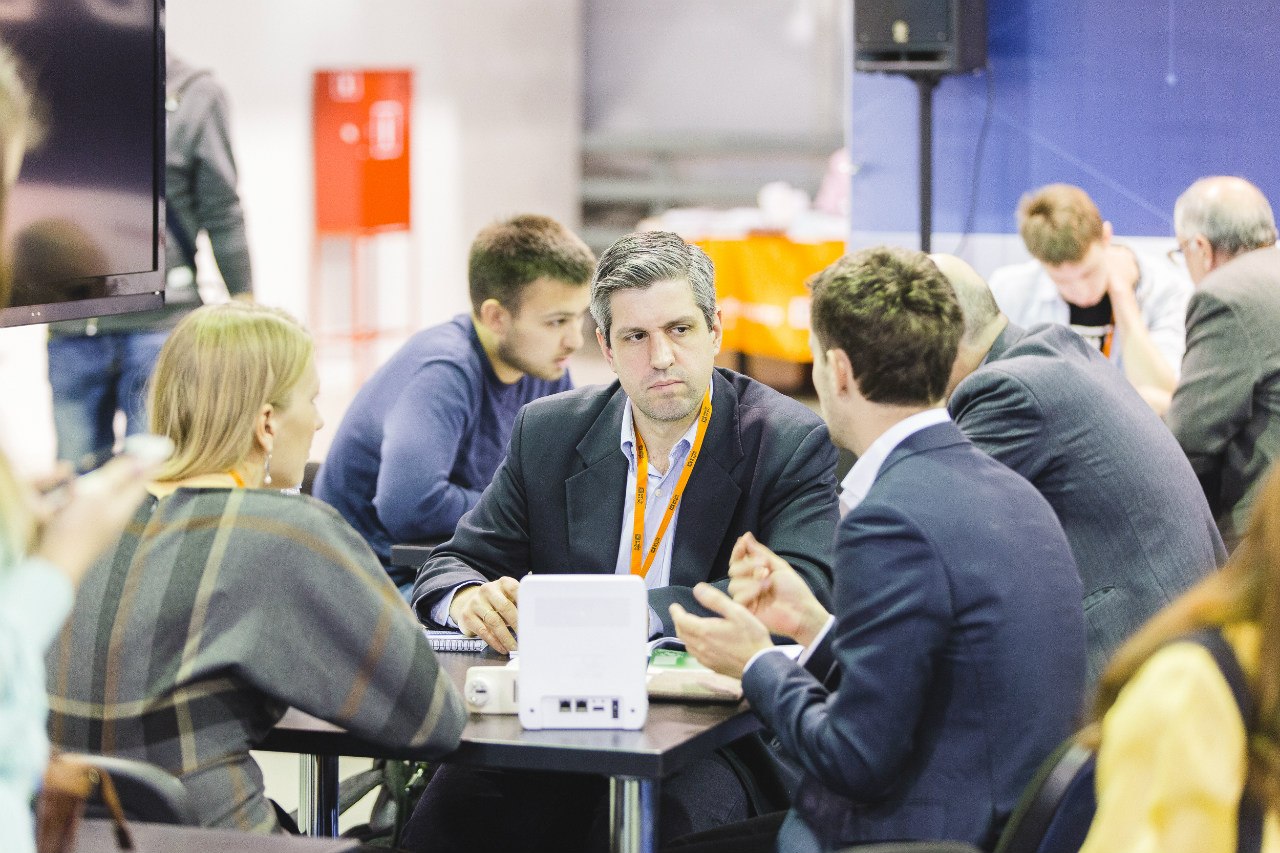 On 28 and 29 November Robotics Expo 2014 held exciting and creative workshops for children that included course of robotics Arduino, that allows to acquire the skills of work with this worldwide popular platform, and create unique gadgets, implementing the most incredible ideas. Also, participants were given the opportunity to study robotics using innovative construction kit of the new generation from Lego.

Partner of educational workshops for children was Center for Scientific and Technical Creativity and Development - N.O.T.A.

Another event that will long be remembered by all visitors of the exhibition is the competition of quadcopters Hot Copter Challenge that was held on the third day of Robotics Expo.

Copter Zone was partner and co-organizer of Hot Copter Challenge. 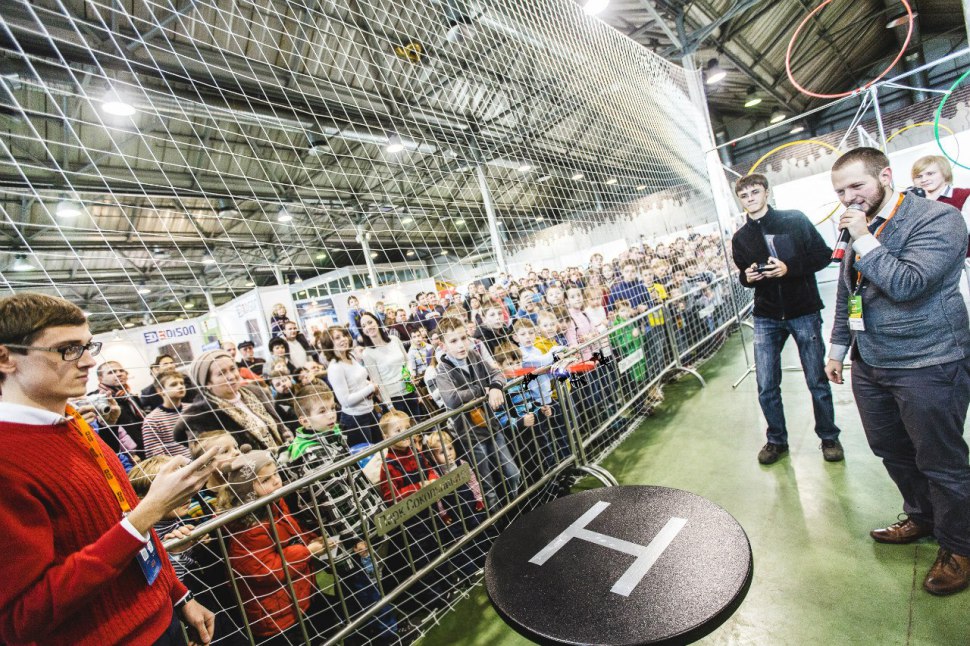 Despite the obvious B2B-format of the exhibition on the first day, on the next two days there was fun relaxed atmosphere in "Sokolniki"; organizers managed to create it with the help of intensive entertaining program. 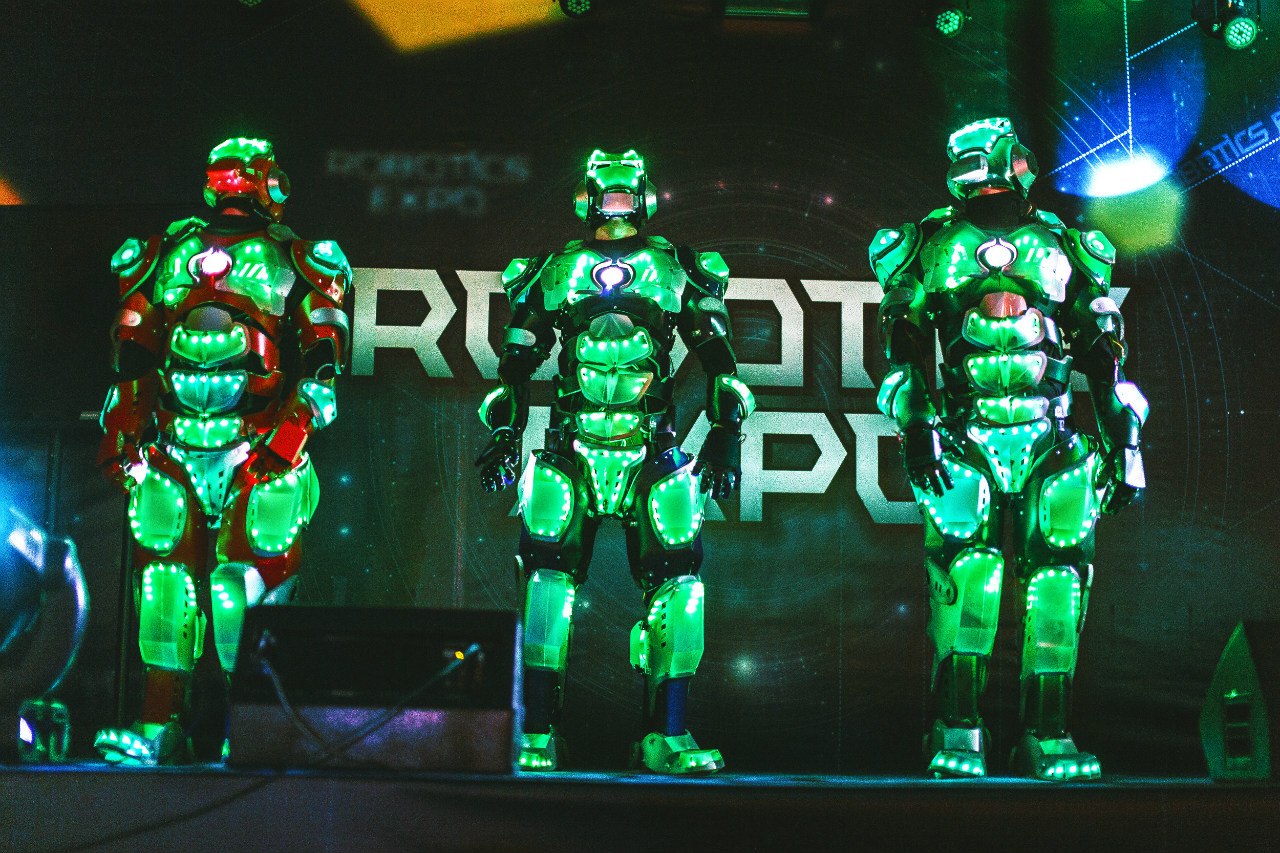 Summarizing II Annual Exhibition of robotics and advanced technology Robotics Expo 2014, we can say the following: robotics is one of the most promising and important sectors that will determine the course of human development for many years. The task of Russian scientists and manufacturers is to accept these changes and get involved in this process as soon as possible.

Organizer "Smile-Expo" believes III Annual Robotics Expo to be held in autumn 2015 will showcase new robots and new technologies that will revolutionize our lives.

Special thanks to: "Skolkovo", "Skolkovo Robocenter".

Also we are grateful to our media partners: Hi-Tech Mail.ru, Cnews, Naked Science, Gezeta.ru, "Moskva24", "Russian Reporter", "Science 2.0" and others.