Delivery robots to appear in the streets of European countries 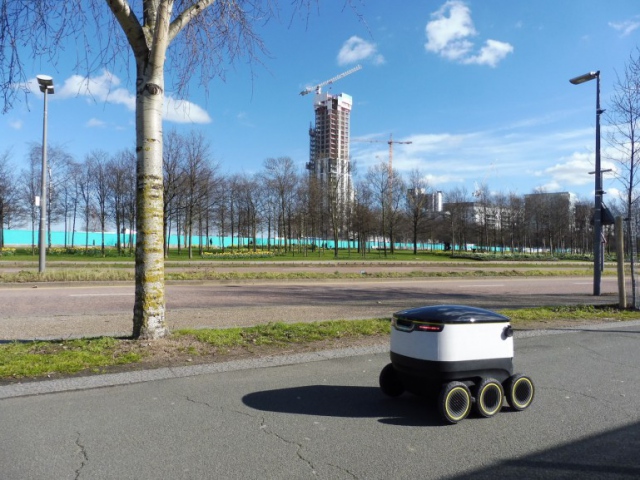 Starship Technologies was started last year by two co-founders of Skype – Janus Friis and Ahti Heinla.  Experts decided to concentrate efforts on developing robotics, specifically unmanned. Currently, robots are ready for use and will be tested by two major London-based companies. Soon, similar trials will be carried out in three towns of Germany, where the company will collaborate with well-known courier company Hermes and company Metro Group.

Smart machines from Starship Technologies can carry cargo weighing up to 18 kg, at velocity of around 6.5 km/h and cover a distance of up to 5 km. To ensure safety of products and parcels, the doors of storage compartment are opened only after a code is entered, which is sent to customer’s smartphone. Besides, robots are equipped with video cameras and speaker units, which also facilitate enhanced security when driving along the streets. And in order to avoid collisions and follow the best possible routes, delivery robots have lots of sensors and a GPS navigation system.

During preliminary tests delivery robots from Starship Technologies have already driven round 8 000 km and encountered over 400 000 people. And there was not a single incident, theft or collision with pedestrians or cars. Thus, it can be expected that this innovation will catch on and soon smart robotics will be driving along the streets of European countries.

Today food delivery costs round £12 in London. But Starship Technologies is planning to knock the price down to £1 per one delivery.