Peculiarities of the National Robotics: robots produced in Russia 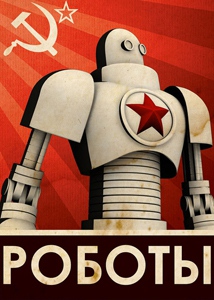 History of Russian robotics began back in 1969, when the first industrial robot was developed - "Universal-50". Today, engineers create industrial, aerospace, military and consumer robots. Also humanoid robots androids are being actively developed today; they combine the quality of all abovementioned machines, and, in fact, these are the robots “of all trades”.

Shift to robotic technology will help businesses reach a new technology level, produce goods of better quality, and will enable to turn productive processes into more flexible. Machines successfully operating in the domestic market are the direct confirmation of that.

What kinds of robots are there in the Russian market?

«R.Bot 100» is a telepresence device controlled by a person, but yet characterized by a certain degree of independence.

«R.Bot 100» has dual wheel gear, it moves at a speed of 2 km/h, if the surface is relatively flat. The machine is capable of overcoming many obstacles that include thresholds and cable channels. Machine is also capable of video and audio broadcasting to operator (ie telepresence), playing the voice of the operator and demonstrating reference information and videos. The device also has speech synthesizer that plays back audio files recorded earlier.

Anthropomorphic robotic system «SAR-400» is also known as robot astronaut. It was developed specially for Roscosmos by specialists of "Android Technics". «SAR-400» has been designed to become an assistant for astronaut on the International Space Station. «SAR-400» is capable of completing simple, but unsafe for human operations. It can inspect the spacecraft for damage, faults and repair it if  possible.

«Webot» is a Russian remote presence robot run by people. It was made with the assistance of "Ashmanov and partners".

In its scheme a bot is similar to human. It has a head that can be rotated in two perpendicular planes, mobile platform for free movement in space. Such design makes robot control as simple as possible. Instead of "eyes" robot has two video cameras. One is placed on the head and helps the machine to communicate with people, and second gives a view under the wheels of robot. The machine has Parktronic system, which simplifies robot control in confined spaces. Machine height is 1.5 meters and its weight is 16 kg. One can control robot using Google Chrome and there is no need to install additional plug-ins to do it. There is a desktop application designed for Windows and Mac OS X to control the machine.

«Gnom» is a remotely operated underwater vehicle, which belongs to micro class. Has small weight and size characteristics, the weight of the entire set of equipment is up to 20 kg, and low power consumption (less than 200 watts). At the same time, its functionality is not inferior to underwater vehicles of higher classes.

«EL-10» was created as a fire-fighting robotic system that can work in special hazard area. EL-10 can be used to investigate, to perform rescue tasks or to clear the debris. The robot can fight the fire under the conditions of high temperatures, radiation and/or chemical pollution of the area, explosions. Robot is controlled via radio signal sent from command vehicle that can be located at a distance of 1.5 km.

«R-BOT 001» was developed by employees of Moscow company "3Detection" for public order maintenance in Perm in 2007. The robot can observe the streets of the city, detect violations and urge citizens to comply with the law.

As you can see, Russian robotics is under active development. You can see it at first hand at second specialized exhibition of robotics and advanced technology Robotics Expo 2014 to be held on 27029 November in Moscow ECC "Sokolniki". For the first time the event was held in October 2013 and it brought together over 3,500 people.

Organizers of Robotics Expo 2014 made ​​the program of the show even more extensive and fascinating. The first day of the exhibition will be dedicated to B2B. The next two days exposition will welcome everyone interested. Here not only domestic manufacturers, but also brands from Korea, China, Israel, France, Germany and the United States will present their developments and achievements. And so it will be very interesting!