Let’s fire at drones and draw new ones! Exciting activities of Robotics Expo! 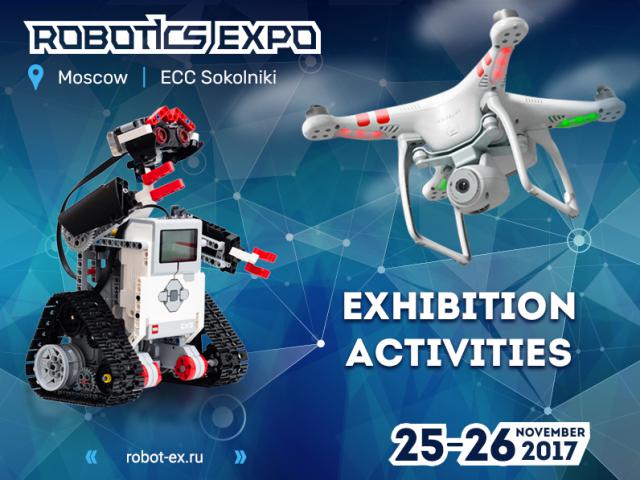 Do you feel bored watching completed robots? Well, attend Robotics Expo on November 25-26 and assemble your own one! Besides, you will also be able to fire at flying drones and draw the new ones using a 3D pen!

A special zone for drone flying – Drone Drome – will be available during both days of the exhibition! On November 25, everyone bringing their own drones will be able to show their flights.

And the next day, there will be the extinction: firing at drones!

According to this contest, one of participants controls a drone, while others try to shoot down it. The UAV owner should bring their device through the obstacle zone safe and sound, and others should destroy it!

Terms and conditions will be revealed during the event.

Has your drone died an honorable death? Not a big deal, let’s draw a new one!

Robotics Expo will have a zone for drawing using 3D pens. Join the 3D drawing workshop and create your own 3D masterpiece!

workshop will be held by representatives of 3Dmarker.ru, a provider of Myriwell unique 3D pens as well as ABS and PLA plastic in kits consisting of 15 colors.

Everyone is able to master this skill if they want!

There’s no point in buying a robot if you can construct it on your own. The exhibition will include a series of workshops for kids and teenagers on assembling robots organized by LEGO and Technovision.

LEGO Education Academy’s workshops will involve the following participants who will assemble their own robots:

At Technovision’s workshop, participants aged 14 or older with programming skills will assemble a robot using the RobotDyn construction kit. Moreover, they will discover many interesting things about the Internet of Things and will be able to animate their models!

Drone shooting and 3D drawing are available for everyone buying a ticket to Robotics Expo.

Important! Robot assembling workshops are paid separately! Parents who have paid for the workshop obtain a discount for admission tickets using the promotion code: roboticsexpo69.