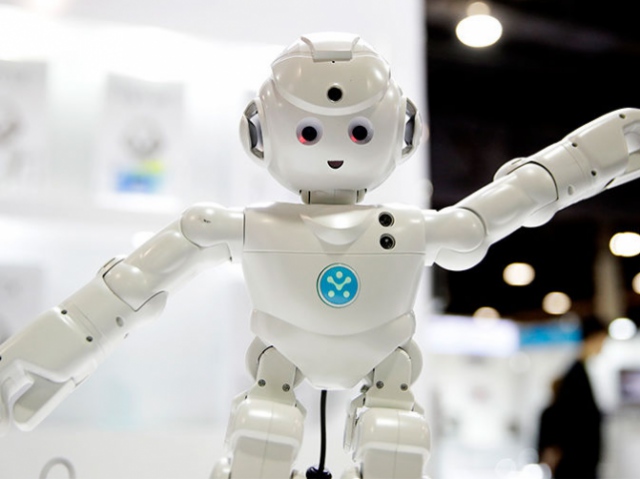 CES 2017 exhibition for consumer technologies was held few days ago. Even this fact alone is a good reason to write about it, and if you remember those amazing robots demonstrated during the event, the reason turns into an urgent need!

We have already published the news on outstanding participants of the exposition such as exoskeleton Prosthesis and Kuri the home assistant. Now it is time to talk about other interesting characters.

That is how a new robot assistant developed by Panasonic looks like. It is very compact and its size is not bigger than a food processor (height - 38.9 cm, diameter -29 cm), it is able to move silently and go around various obstacles.

And that’s not all about technical delights of the Panasonic offspring. What draws the attention is his mobility. Thanks to the servo control technology, the robot is capable of surprisingly accurately and smoothly simulate some of the people’s movements limited only by its design features, of course. The machine understands voice commands and is able to communicate in common language using self-improving speech recognition algorithm. As a result, the robot learns quickly and is able to maintain quite an efficient conversation. It can also independently connect to the Internet, download any information and support remote communication with other machines and people.

The list of electronic components that the Panasonic device can boast of includes Bluetooth/Wi-Fi, five infrared sensors, a video camera and a projector under a sliding cover. Autonomous work of the "egg" is provided by a 6600 mAh battery, which is enough for six hours of non-stop operation.

Hub Robot is designed for controlling smart home elements. It understands voice commands and is able to perform everyday tasks such as turning on the TV. In addition, the device can play music, create reminders, replace the alarm and even inform the user about the weather and traffic conditions. The machine is able to demonstrate a wide range of emotions through showing stylized images on the display, recognize family members and memorize their daily routine. It even has its own assistants! Small copies of Hub Robot are a part of the kit. They are connected to the main unit and can be used in different areas of the house replacing the original robot.

Airport Guide Robot – a robot assistant designed to work at airports. It provides information about the flights and landings, the location of the needed plane, may explain how to find the duty-free or other facilities at the airport, informs about the weather in the requested city, etc.

Airport Cleaning Robot – a humanoid robot and a vacuum cleaner. It can clean all types of surfaces including marble and carpets. The robot is able to accurately track its location avoiding bumping with people and obstacles. This allows it to work making no damage to others even in crowded places such as mentioned airport, for example,

Lawn Mowing Robot – this one can be called Airport Cleaning Robot’s brother as it uses the same technology. Sensors help to avoid hitting the car or accidentally cut things that should not be cut.

Allowing drones to coordinate their flight is the main goal for Qualcomm. The result of the work is a Snapdragon Flight Drone platform, which was also demonstrated by the company at CES 2017.

Snapdragon Flight Drone allows to recognize objects encountered in flight. Depending on what it "sees" the route is mapped in motion.

Demonstration of the new technology took place in an enclosed pavilion without using GPS. The results were impressive - the drone went through all the obstacles and landed at required point proving this way that it is able to fly independently.

Let’s dream for a while…

At CES 2017, just like last year, many types of smart cars were shown. Toyota found the most innovative solution offering a car not only to connect to the Internet, but also to provide it with full artificial intelligence named Yui.

Yui will regularly analyze the activity of the car owner - his driving style, physical performance, state of health and even appearance. The behavior of the artificial intelligence will be based on this data, especially in terms of its communication with the driver and other intelligent machines as well.

AI will also assist the driver while driving by giving advice on the choice of route and predicting the likelihood of an accident. If necessary, Yui can fully take control of the vehicle.

All this sounds really nice, but Toyota has not produced such a smart car yet. At CES 2017, they offered only the concept of this technology, showing beautiful but quite futuristic pictures. Concept-i is how Toyota named their concept of the new generation not specifying the probable date of its appearance in reality.