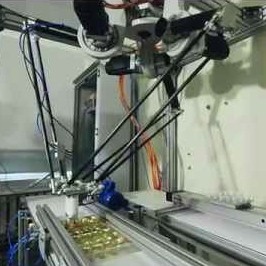 Robotics Expo line-up is getting bigger and bigger. Thus, specialized exhibition welcomes BIT Robotics, which is dealing with a complex automation and creating new equipment for technological processes from scratch.

Having visited lots of factories, company specialists turned their attention to the need of packaging process automation, including the necessity of high-speed robots, the so-called delta robots. In Russia, there’s no production of such robots, so BIT Robotics decided to start one.

After more than a year of design, BIT Robotics created Russia’s first industrial delta robot. It’s worth mentioning that there were Russian enthusiasts that have previously been creating delta robots with kinematics, but these amateur developments couldn’t be used on assembly lines or compete with the foreign ones.

BIT Robotics delta robot’s characteristics show not worse results than foreign analogies. There are innovational materials used in its structure, including composites.

Company’s possibilities and experience allow to produce any robotic systems, including systems that use computer vision.

Visit Robotics Expo to make sure for yourself!

Main event of the advanced technologies and robotics will take place on 27-29 of November in ECC Sokolniki, gathering developers, providers, practitioners and theoreticians, as well as all enthusiasts of global technology world.