Root – a robot teaching children how to code 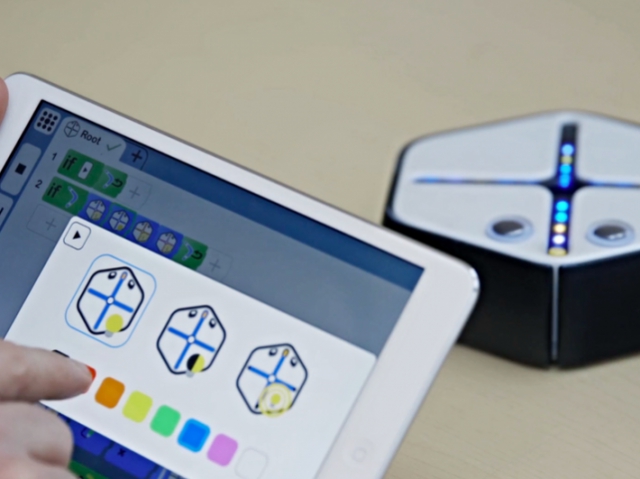 Scientists from Wyss Institute have created a robotic system Root, which allows small children to learn basic notions of coding. The robot moves along magnetic whiteboard, draws different pictures, can produce sounds and give signals of different colours. Children can control this technological wonder with the help of special application called Square, which can be installed on iOS tablets.

The application and robot turn the process of learning how to code into a joyful game. Square offers several levels of complexity. On the first level the robot is managed with the help of graphical icons. On the second level children learn to manage variables. And on the third level beginning programmers learn to program Root with JavaScript language.

Author of the project Zivthan Dubrovsky says that a program created on the first level can be transformed into the second or third level in order to see how it will look like in another format. For example, having shifted to the third level, user will be able to see which lines of code are responsible for specific actions of the robot. User can also shift from the third level to the first or second.

What differentiates Root from other devices is that it helps young programmers to understand different aspects of coding, including object oriented, which is basic for learning text-based coding.

Using opportunities provided by Square, children can adjust robot’s light sensors in a way to constrain its movements, create a unique version of Angry Birds, make Root pronounce different words and many other things.

The team of scientists has already successfully tested the application and robot in secondary schools. Many experts believe that soon this method of learning coding will be added to mandatory school curriculum.

Currently Root costs $199. Users can also subscribe to the newsletter from developers of this project in order to follow the news about all updates and new features of the robot.