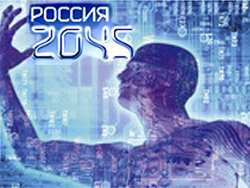 Strategic social initiative “Russia 2045” has been founded by the Russian entrepreneur Dmitriy Itskov in February, 2011 with the help of the leading Russian specialists involved with the neurointerface, robotics systems and artificial organs.

“Russia 2045” aims to create and implement new strategy of the mankind development that will be concerned with the global humanity challenges, possibilities for the spiritual transformation and realization of the new futuristic way of life, based on five factors: supreme spirituality, culture, ethics, science and technologies.

The main scientific megaproject of the initiative is focused on the transformation of identity to more advanced abiotic unit and life extension up to the level of immortality. The main task of the organisers is to establish the dialog between religion, science and society.

“Russia 2045” is working on the creation of the International Research Center where the most prominent scientists will study the anthropomorphic robotics, living systems modeling, brain and psychic simulation in order to build cybernetic technologies that could efficiently extend the human life.

The initiative is arranging an annual congress called “The Global Future 2045”. The goal is to discuss the evolutionary strategy of the mankind, based on the development of the cybernetic immortality technology and to find out its possible impact on the humanity, politics and future economic life.

Introduction and mainstream use of the affordable humanlike avatar robots, controlled by the “brain – PC” interface will provide whole new possibilities to people: avatars will be used to rescue people, perform work in dangerous environment and as the means of transportation.

Avatar’s constituents will be applied in healthcare industry for the rehabilitation of the entirely or partially disabled patients and for artificial limbs or sensory organs.

Development of the autonomous brain supporting system and its connection with the avatar robot (human’s copy) will allow saving lives of people who have run out of their vital energy or suffered from mortal damage. Practically every person with an intact brain will have the possibility to come back to normal life. The integral parts of this technology will substantially extend the potential of the hybrid bioelectronics devices and combine electronic and biological systems, boosting the new IT-revolution.

Computer model of human brain and psychic with further identity transformation to the abiotic unit will totally change the world, because not only it will provide cybernetic immortality to everyone interested, but it will also create a friendly AI and extend possibilities to recreate and modify brain for the numerous times. Generally, this research can cause the revolution in the way we understand the human nature that will totally change humanitarian and technical aspects of the future mankind.

When the immortal independent brain will get new body with a lot more possibilities than people have now, a new era will commence. Changes will affect every area of human activity – power engineering, transport, politics, healthcare, psychology, science etc.

Nowadays it’s even hard to imagine the future where we will use nanorobot bodies capable of taking any shape as well as holographic bodies with controlled corporality. One thing is clear – the humanity will not only make the first in its history totally controlled evolutionary step and ultimately transform into the new specie, but develop all the possibilities for the space expansion.

Future key issues of the project