Seven robots that can make a difference 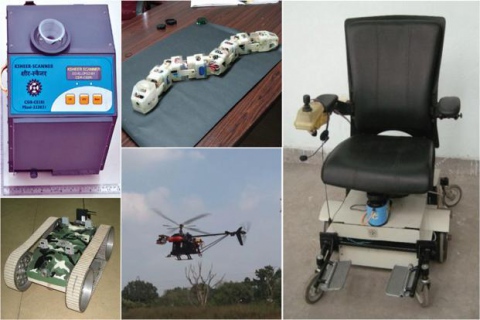 India’s largest research and development organization, Council of Scientific and Industrial Research (CSIR), typically works on a range of applications from fields including quantum mechanics, genomics, oceanography, material sciences and robotics. Mint profiles a few of its robotics projects that include an electronic tongue, a teleoperated flying robot, a snake robot, a mule robot and one that can work on any terrain.

The idea of creating a robot that can imitate a snake’s movements has been around for over a decade the world over. Any snake robot must have the capability to move within a confined area and traverse terrains like pipelines that conventional wheeled or walking robots can’t do. CSIR’s serpentine robot’s main application is remote surveillance in hostile environments to locate survivors from debris in case of earthquakes, bomb-explosions, fire hazards and various other natural disasters. The robot has six body parts with a head and a tail. These segments alternate in orientation so that the first segment can move horizontally and the next segment can move vertically. This gives the robotic snake enough flexibility to move its body in a number of different ways, like a live snake. CSIR also has an autonomous mule project that aims to create a wheeled “pack mule” robot capable of carrying loads and assisting personnel on foot. The completed mule robot should be able to follow a human in an unstructured environment and navigate using the global positioning system.

The autonomous intelligent wheelchair uses robotics in a low-cost device for physically challenged persons to allow mobility without human assistance. The robotic wheelchair has a motorized steering control with a six-wheel configuration. The middle wheels are the drivers with two front and two rear spring-mounted castor wheels for enhanced mobility and stability. The robotic wheelchair is capable of taking a spin in a narrow corridor or going up an inclined pavement. It remains stable over all these terrains and can navigate smoothly over small bumps. The device is made up of components that decrease the overall weight, without compromising on safety. Power is supplied from a lead acid battery bank that can be easily charged.

Tea quality is typically assessed by tea tasters. But this could be a highly subjective process. Four years back, CSIR scientists developed an electronic tongue, or e-tongue—a portable device to classify Indian tea in terms of manufacturing process, harvest, and brand variations and chemical concentrations. This provides an objective analysis of tea in terms of taste, smell, flavour and colour. The idea was also to find the percentage of adulteration in synthetic milk. E-tongue is made up of an electronic panel that can display the percentage of chemicals present in milk by “tasting” it. The methodology is based on voltammetry, a technique which is used to obtain information about components in a solution. Over the years, the project has been extended to developing a system that can discriminate between basic tastes including various types of cold drinks, mineral water and fruit juices. Other applications being worked upon include measuring the oil content in petrol.

ROBOTS FOR ANY TERRAIN

The Modified All-Terrain Robot is a lightweight mobile robot, designed and developed to cater to the strategic requirements of India. The main objective is to autonomously navigate within an unknown environment and identify objects of interest. Its main applications include general security and surveillance, detection and defusal of landmines, detection of bombs and explosives, fire-fighting, handling of hazardous materials and supporting post-disaster rescue missions. The robot comprises a multi-agent-based client-server system architecture using asynchronous data communication and an inexpensive and specially-designed infrared rangefinder for obstacle detection. The robot can be manually operated or its trajectory can be pre-programmed or operated from an online command console. CSIR also has an autonomous robot on intelligent behaviour which is mainly used to gather intelligence and information. The robot has two infrared sensors that can sense the obstacle in front of it. After sensing the obstacle, the robot can send a signal to its DC (direct current) motor that guides its movements. The robot can be used in places where human beings cannot go. There is also the outdoor mobile robot, which can detect explosives. It is a four-wheel drive system with a motor, bevel gears, sprocket-chains and wheels. The robot also has a voice-based control for manual operation.

IS YOUR FOOD FRESH? ASK THIS ROBOT

The Embedded Odor-Vision Sensing (OVS) System aims at detecting how fresh your food is. It can acquire, store and analyse responses from different odours and vapours as well as the images of various food samples to generate a database for food items. It also has the ability to communicate with different OVS systems within the region over a wireless network. It has an odour-vision sensor head, chamber, and an interface to the embedded hardware and software platform that can be calibrated and tuned to cater to specific food varieties using the appropriate neural network.

The Central Mechanical Engineering Research Institute is working on a modified version of a remotely-operated vehicle or ROV-MK II—an underwater robotic system designed to operate at a depth of 200 metres (m) to help scientists understand ocean life better. The modified version will be able to dive nearly 500m. The robot has navigational sensors, an underwater camera and thrusters for propulsion. The ROVs are linked with a surface-controlled station on the mother ship that transmits power, control signals and navigation data. Applications include marine geological surveys, inspection of underwater structures like offshore drilling rigs and marine pipelines as well as marine detection and salvage operations.

Teleoperated robots go by different names and are increasingly finding application in space and underwater exploration, and even in surgery. A flying teleoperated robot has slow operational speed and is ideal for activities such as minute inspection tasks, apart from search and rescue, observation and mapping. The unique lift-generation mechanism of a rotorcraft enables hover, vertical take-off/landing, pirouette, and sideslip. The project aims at autonomously carrying out functions such as inspection of bridges, aerial survey, and search and rescue in all-weather conditions. It focuses on generating a trajectory that can ensure optimal coverage in minimum time. It takes advantage of the flight capabilities of rotary-winged robots for high-fidelity detection, location and tracking of targets. Among other things, the flying robot has on-board sensors and an on-board computer.