We will rock you: robotic rockers that conquered the world 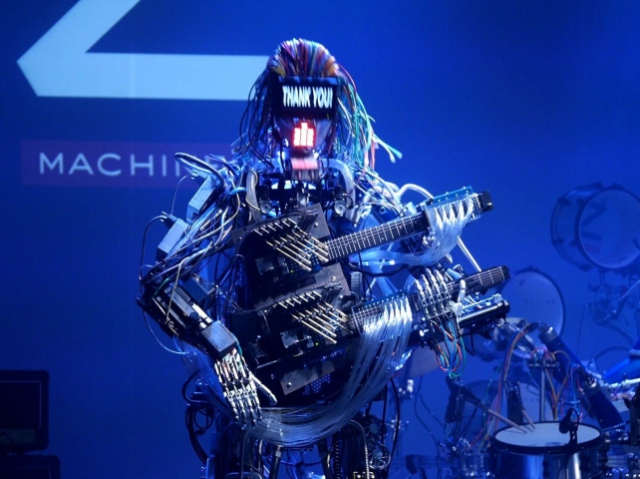 Pink Floyd vocalist Roger Waters said one day: “If you want to blow your brains out and share it with others, you play rock.” And robotic rockers have perfectly mastered the art of “mind blowing”! Just look at those guys from our new selection – no one will remain indifferent to their concerts.

Meet a real rock band made up from robots. Two guitars, a drum, keys – everything what humans have. Except for the vocalist, but even without him the group is doing its best. It has given over 80 concerts and had two European tours during the time of its existence.

The Trons were created by Greg Locke, inventor from New Zealand, back in 2008. He not only constructed robots and developed corresponding software but also wrote music for his band. Thus, robotic musicians have a fully original repertoire, which adds them some special charm in the opinion of the audience. But nothing has been heard about The Trons lately, so probably the group does not exist anymore. Or, it could be preparing a new unforgettable show for viewers.

This unusual rock band emerged in Germany. It plays heavy metal only. The appearance of robots fits the music they play. Just look at the Mohawk hairstyle of the drummer – Stickboy! He was one of the first band members, built in 2007 together with its assistant called Junior. Later they were joined by Fingers, a funny guitarist with 78 fingers, and Bones, a brutal bassist on a caterpillar-tracked platform. This band has already travelled halfway around the world, giving performances even in Moscow.

Compressorhead plays both own and borrowed music. Its repertoire includes hits of such famous rock bands as Red Hot Chili Peppers, Metallica, Led Zeppelin and others. Soon a robotic vocalist will join the band. Meanwhile, it isn’t shown to the public, but developers say that a new album is being recorded now.

That’s another brutal rock brand, this time from Japan. It was constructed by the specialists of the University of Tokyo. The band consists of three participants – guitarist Mach, drummer Ashura and keyboardist Cosmo. Z-machines band plays songs of famous musical groups, and has managed to give a concert with Japanese pop group Amoyamo.

These guys are good at special effects. For instance, Cosmo can emit beams from his eyes, creating a real laser show. Ashura and Mach are equipped with LEDs that blink to the rhythm of the music.