Lawyer Andrey Neznamov on the legal framework of robotics in Russia: Do robots have rights? 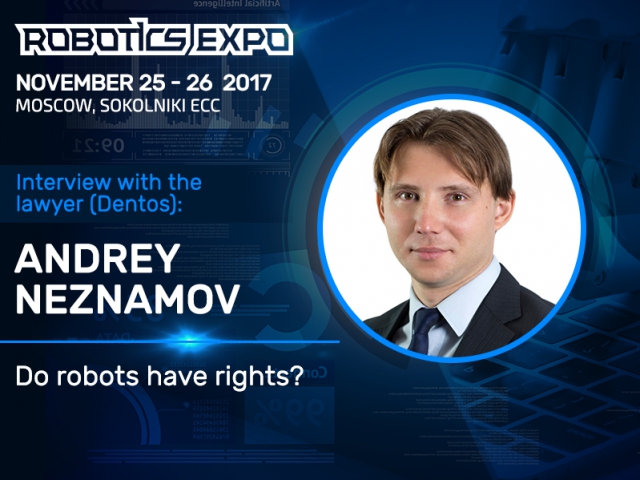 How well developed is the Russian legislative base in the field of robotics? What norms and laws regulate modern robots? Senior lawyer of the Dentons company and one of the robotics bill authors, Andrei Neznamov, told Robotics Expo all about it.

- Hello Andrey! Does the creation of a legislative base in robotics affect the development speed of the industry?

- Of course, there’s a connection here. And this connection is typical not only for robotics but new technologies in general. Over the last century and a half, we’ve seen many examples of lawyers trying to deal with the regulation of new technology, from cars and planes to nuclear weapons.

So we can trace some tendencies, based on two factors: historical experience of new technologies regulation and foreign experience of regulating robotics.

The key outcome is quite simple: laws can make the development difficult or even stop it altogether. Or, on the contrary, accelerate it.

It is important that it concerns not only the creation of new laws, but also the use of existing ones. If the legal framework initially contains all the necessary conditions for the industry’s comfortable development, then nothing needs to be changed fundamentally.

A good example is the initial development stage of small UAVs, i.e. drones when they just started to appear. Up to a certain stage, excessive regulation would simply stop the users' interest in them.

And vice versa, there could be a law that would just stop the development at all. The most famous example here is the British Parliament destroying the automobile industry in the middle of the 19th century. New rules for cars’ use made it so complex that no one really wanted to do it.

So now, it’s important for us to choose the right approach. Not to do any harm.

- Why do you think service robotics is developing the fastest now?

- Actually, it’s hard to say which of the areas is developing the fastest at the moment. If we divide robots only into industrial and service ones, industrial robots were initially developing more actively and were introduced at many enterprises. Car industry and electronics were the driving force here.

But there’s no denying that service robotics is becoming more and more popular and service robots sales are going up. This is due to the price and impact of new related technologies (which also affect the price).

The components are becoming cheaper, people are buying more and more, the production scale is growing, as is the number of manufacturers, prices continue to drop, etc.

Go see for yourself, buying a decent robot vacuum cleaner is becoming easier. Same goes for all gadgets. Today, for 1.5-2 thousand rubles, you can buy a full-fledged fitness bracelet. Before, this money could get you a strap at most.

- Service robots are now manufactured in Russia, but for some reason most of them are exported. What is the problem of using service robotics in modern Russia?

- It is quite difficult to calculate the statistics of service robots use. Not to mention the fact that there is a question of what counts as a robot at all. So there’s a more global problem: why are robots used less in Russia than in other countries?

I think that today, the main answer to this question is labor cost. Why would a factory change workers to robots if it’s cheaper to use human labor (at least for now)? Why would you automate any service, if it’s cheaper and easier to use a person there?

The situation will change dramatically when an economic reason to implement robots appears. No matter how much they would cost, if there is a real effect in money, implementation will start immediately. Of course, there will be a number of non-economic factors, like social consequences, political moments, etc. But competition will force companies to act economically efficient anyway.

And at the same time, robots are also doing their part, the price is consistently falling with the new developments emerging. Therefore, the moment of mass implementation is inevitably coming.

- Russia has recently introduced mandatory drone registration. Do you think this is a right thing to do? And will there be anything like this for robots?

- Of course, yes. We are one of the few countries where drones have actually become quite widely used, but we don’t really have any laws for this. We studied the experience of other countries that have this field thoroughly regulated for a long time.

As for robots, there will be something similar for certain categories. The so-called intelligent robots are a matter for the future. But delivery robots, for example, can appear on our streets quite soon. And then the question of their registering will arise for sure.

- Some experts believe that in the near future robots will replace human labor in production. How will legislation work in this situation, whom will it protect?

- It depends on the country. A number of Western countries have been discussing this issue for quite some time. For now, the most common point of view is not to limit robot development and to cope with all social consequences at the expense of dividends, brought by general robotization. Because of this, the idea of ​​an unconditional basic income appears more and more often. Its something you can always count on, something the robot will pay you with its labor.

In my opinion, the worst thing someone can ever come up with is the artificial slowdown of development because of the unemployment problem. The country that will start doing it will be out of the technology race and will wreck its economy. Businesses will just go somewhere with no limitations, where it will be cheaper and easier to work. We’ve already seen this in the example of China.

- What does Russian legislation lack to adopt new laws in the field of robotics?

- I think that in the near future, we will see the adoption of laws in this area, and it will objectively be a whole series of changes in the legal framework.

I think that it’s logical to pursue development consistently. We should start with an upper level normative act, which would define all the regulation basics, its foundations.

It should optimally be preceded by a state strategy for cyber-physical systems development. Such strategies exist in all leading robotic countries. And those strategies usually have a section on changing the regulatory framework. It’s a good start.

After the legislative framework, it would be reasonable to introduce batch changes in specific areas, depending on the development of a particular technology. This process will be endless. It is important that basic legislative principles could allow regulating public relations related to the new technology on a basic level while there are no new laws.

This structure will allow us to reasonably react to all the challenges ahead. And there will be a lot of them.

- In December 2016, a bill on robot agents was published in Russia. Can you comment on it? In which countries does the law protect robot agents best of all?

- The bill reflects approaches already present in the industry. Many ideas of this bill echo the European parliamentarians approach. In their "Civil law rules on robotics" resolution they reflected a number of statements close to the Russian bill drafted by Dentons for Dmitry Grishin.

I think that this initiative turned out to be very useful. In 2017, we see an unprecedented interest in robotics regulation. I would say that the bill on intelligent robots was one of the reasons for this.

Andrey Neznamov will be one of the speakers at Robotics Expo 2017 conference on November 25. He will talk about the prospects of robotics and artificial intelligence regulation in Russia.

Ask Andrey a question after his speech or talk to him personally during the coffee break!

Register to the Robotics Expo 2017 conference.